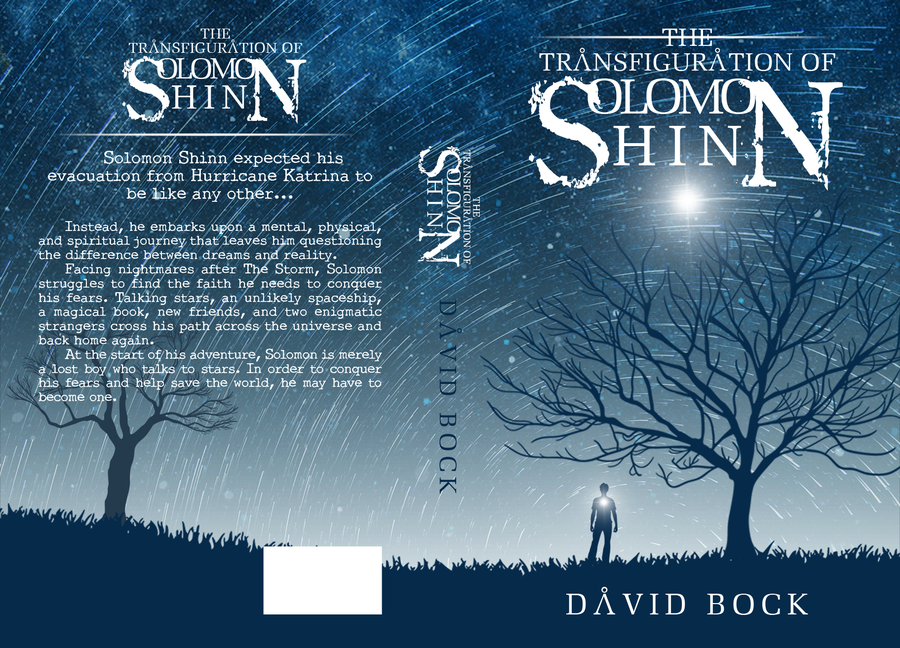 bockascension needed a new book or magazine cover design and created a contest on 99designs.

A winner was selected from 72 designs submitted by 19 freelance designers. 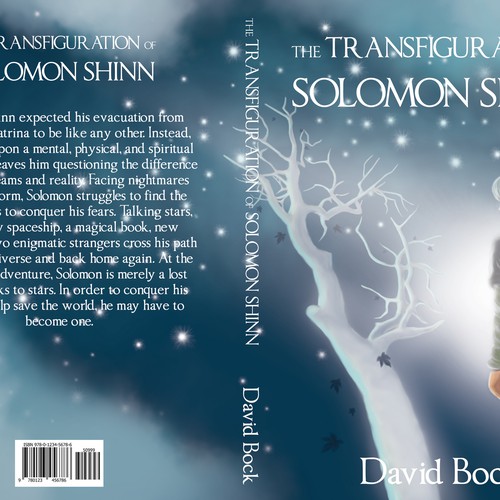 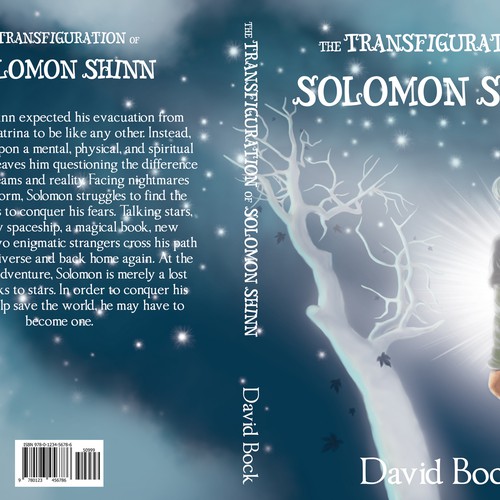 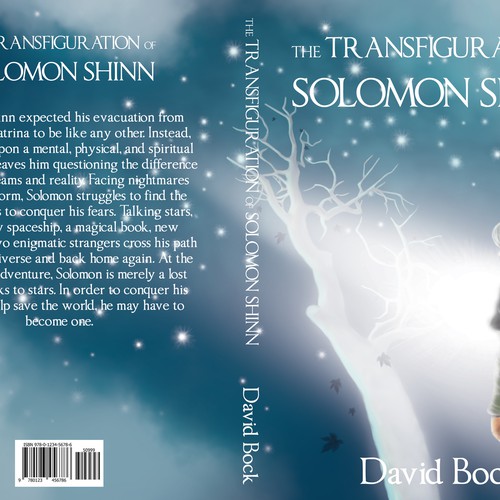 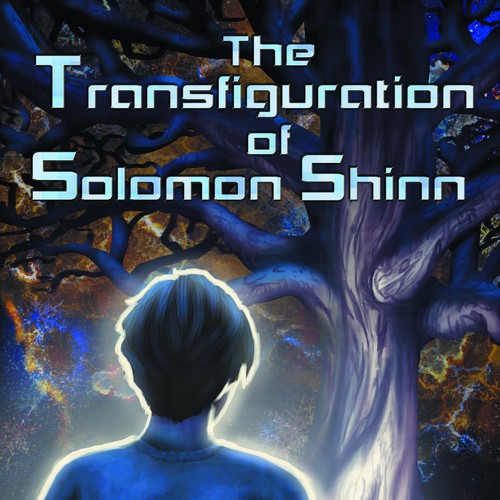 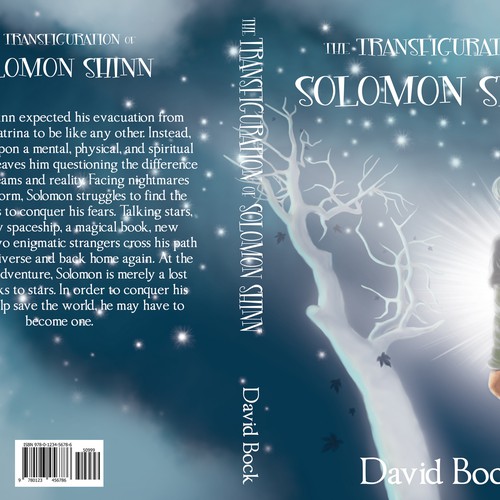 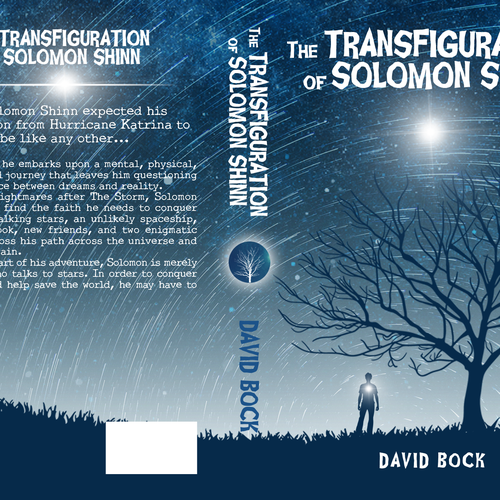 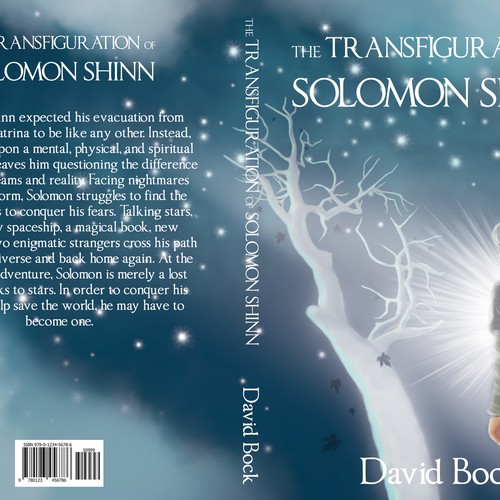 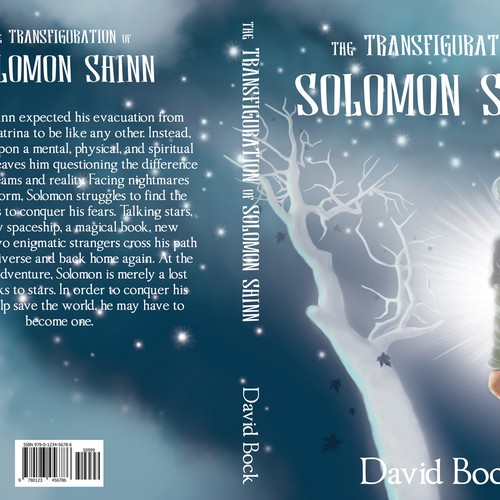 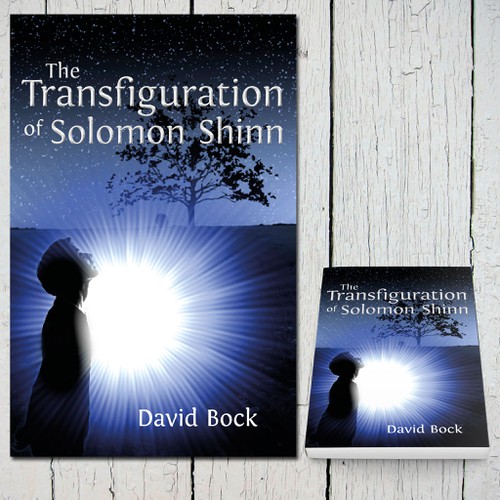 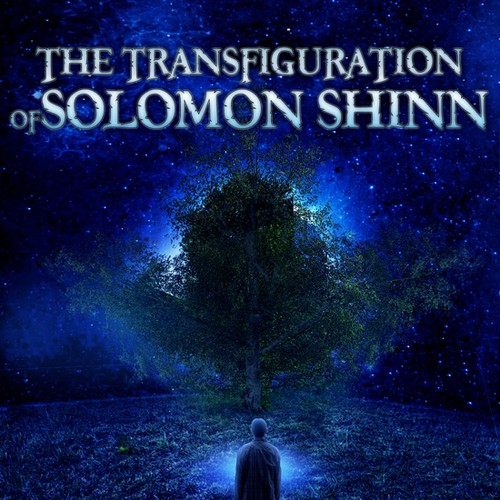 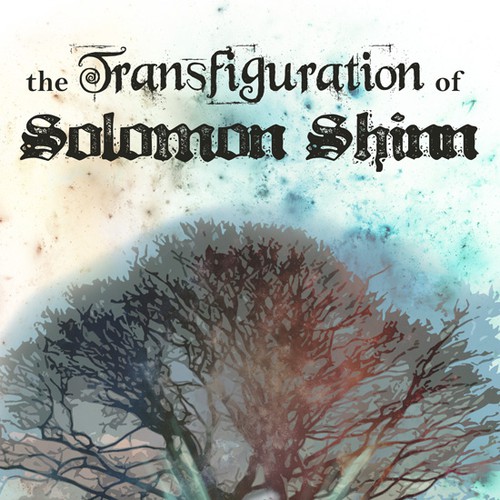 Winner - 88dsgnr
Ended up with a design far, far better than I dared hope. 88dsgnr was responsive and patient, and worked hard for a long time to meet my requests. Couldn't be happier.
- Anonymous

Finalist - Diogo Red Raven
Great Job. Amazing communication and easy to work with. I would definitely work with this artist again!
- Anonymous

I need a book cover front and back for my middle grade-young adult
novel: The Transfiguration of Solomon Shinn.

I am looking more for of a hand drawn look or art work look rather
than stock photos. see Harry Potter and Percy Jackson covers.
Front cover: I am picturing a bare sycamore tree see description from
book ("The two wings of the tree extended in opposite directions. To
someone else they might have looked like angel wings, the way they
glimmered under the stars and waved in the breeze. To Solomon, the
tree resembled a plane or perhaps a starship with its nose in the
ground and its wings pointing up to the sky, but to the casual
observer it was simply a large tree dropping leaves in anticipation
of
winter.") This tree is later used as a spaceship type device for
travelling.
Front Cover continued:
I envision a fourteen year old boy with dark hair or his silhouette
with his back to us looking up at the tree under a starry sky, and a
star or ball of light emanating out from his center and radiating out
into the space all around him. During the course of the book he meets
and talks to stars, but by the end the main star enters his body and
he in effect becomes one as he fights his battle to conquer his
fears.
Back Cover:
I would like the below quote/description of the book with consistent
artistry or imagery from front cover surrounding:
"Solomon Shinn expected his evacuation from Hurricane Katrina to be
like any other. Instead, he embarks upon a mental, physical, and
spiritual journey that leaves him questioning the difference between
dreams and reality. Facing nightmares after The Storm, Solomon
struggles to find the faith he needs to conquer his fears. Talking
stars, an unlikely spaceship, a magical book, new friends, and two
enigmatic strangers cross his path across the universe and back home
again. At the start of his adventure, Solomon is merely a lost boy
who
talks to stars. In order to conquer his fears and help save the
world,
he may have to become one."
Style of front cover: Use your artistic liberties. As a starting
point I am picturing a hand drawn-type illustration similar to The
Lightning Thief:Percy Jackson and the Olympians Book 1 by Rick
Riordan

Possibly an abstract of a hurricane storm cloud transforming into a
supernova of a star.

3:)
Other info to inspire different options:
The novel starts with Solomon searching the sky through his
telescope. The climax of the book finds Solomon fighting his own
materialized fears on Chalmette battlefield(site of Battle of New
Orleans). At one point he is engulfed in a recreation of the flood
waters from Hurricane Katrina that covered his home. He emerges with
a
star beating inside his heart and transforming him into a human/star
on the battlefield as he battles the storm of his own fears. At the
end of the battle he actually transforms into pure light as he allows
his fears to pass through him allowing his light to extinguish them.
Be creative and ask for more info if needed. I will publish this as a
8.5 inch by 5.5 inch typical paperback sized book.

Can you convey fun in overcoming fear? Our students love our process.
US$299
109 million adults in the U.S. who are afraid in water over their heads Adults who have not given up on learning to swim
264
entries
47
designers
Chilly Crime Classics Cover
159 £
Men + Women 35+ who enjoy Classic Crime, traditional British mystery, cozy crime
172
entries
29
designers
Create a compelling "Christian Living" book cover about a glorious secret
US$499
The book would be categorized as Christian Living, and is intended primarily for people under the age of 40.
163
entries
35
designers
Ebook cover for novel The Next Beethoven
USD 529
General fiction reader.
135
entries
29
designer
Design a Book Cover For Small Business
199 US$
30 Plus male and female professionals looking to start a business
98
entries
20
designers
Female Entrepreneurs book needs stand-out cover
£239
Ladies (generally mums aged 25-35) who want to set up in business. Some have been at home looking after children, and t
141
entries
39
designers

Get started now
EBook Cover Design for New Self-Help Title
£159
Female in their 30's, living in the UK, educated, independent and looking to improve their lives through self-help
47
entries
17
designers
Chronically stressed out, over worked and exhausted doctors, nurses and EMS Hospitals leaking $
US$399
Healthcare professionals in upper management and administration as well as front-line staff such as doctors, nurses, tec
35
entries
10
designers
Future BestSelling eBook needs a cover designer
$ 329
Real Estate Investors
176
entries
38
Designer
A Flashy Attention Getting Book Cover about Social Networking
US$299
• mostly white collar professionals • people who network • men and women • all ages 20-64+
103
entries
24
designers
Create a book cover for personal finance book
US$499
Americans aged 16-45 without a financial background would be the primary audience. The book is easy to understand, suit
272
entries
49
designers
Cover Design for Teen-Led Thriller Anthology
US$399
Readers who enjoy crime thrillers.
79
entries
15
designers
Learn more about book or magazine cover design
See how it works